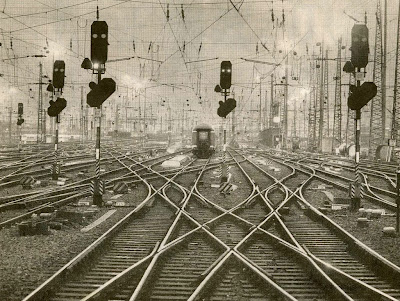 Nobody realizes that some people expend tremendous energy merely to be normal.
-Albert Camus

Today a little vignette to illustrate my point. About twenty years ago, I knew a lady, perhaps she was a client. Marnie was 36, had three kids and a husband who traveled for work often. She worked full time, kids were in school - 9th, 6th and 3rd grade; family planning don't you know. Big comfortable house that came with a big uncomfortable mortgage. The office where she worked was about fifteen miles from home, not a long commute but not right around the corner either. Dean, the husband, worked in the city a solid 40 miles one way and he was out of town two weeks a month though not always for the full week each time. Enough frequent flyer mileage that airport travel and big winter weather patterns were a family concern, at least for the adults.
Money was not tight but they did spend what they made. They did not want for the stuff their social standing required but without any real savings they were precariously perched on the lowest rung of the upper middle class. There was no marital cheating, no heavy drinking except perhaps at the two or three major social events of the year. Sometimes they had sex but mostly they were too tired. The kids were everything and as Marnie said at our first meeting: "Our family is everything and that's not enough."
I had scribbled in my notes: "middle class malaise" - a pithy but accurate diagnosis.
A couple of months into our conversation I had a vacation coming up and Marnie joked about patient abandonment. When I returned there was a cancellation for her next appointment, so we had a interlude of nearly a month between sessions. When we met again, she had a new plan for her family. There had been an accident, four of the neighborhood boys were in the car and one was killed. He was the son of one of Marnie's neighborhood friends. He was one of her son's friends but David, her son, had been at a weekend soccer meet and not in the fatal car.
Marnie and her family were past the trauma, it had been over three weeks since the accident. But her plan came out of the realizations of that loss so close to home. She and her husband were about to tell the children that they were going "slow down the treadmill" -their imagery not mine. No more designer clothes, no more new gadgets, more home cooked meals, more family time. Eventually, dad was going to cut back on travel. Basically, they were going to stop living up to some ideal that Madison Avenue was promoting, again their language. Oh and -- no more therapy.
If you will, try to put yourself inside Marnie's body before the life changing accident. Feel the pressure of keeping up, get a sense of the frustration that comes out as "it's just not enough." Imagine the stress of each child, not one not two but three, the husband, job, bills, the future and the path that stretches in front of you. Got it?
Now take all of that angst, pack in all into one big amorphous blob; detach the family, the job, the entire external world. All you have left is the feeling of dis-ease, of not being calm or content or quiet or relaxed or at ease. Now stuff that big gob of unsatisfactorness into your body, your heart, your spirit, your soul. And wake up every morning feeling without ease. Nothing to attach the feeling to, not a job or a bad relationship or too many bills. The feeling of dis-ease exists as an entity unto itself and unto yourself.
There are people who have that experience every day of their life.
Sure there are degrees, sometimes you can control the darkness with strength of will. Pharmaceuticals work sometimes too, of course, what suppresses the anxiety also damps down the joy. Then you get to add in life, you remember this dis-ease comes fully formed without the everyday anchors of work, money, relationship, health care, Iraq, hurricanes or oil spills. No you get to start your day already burdened by the grey of greys, now stir in what the "normal people" call life and prepare for the big overwhelm.
The point?
Nobody realizes that some people expend tremendous energy merely to be normal.
Don't be a nobody [or be a nobody, wait reverse that].
Posted by The Shrink at 7:17 AM

In the structure of your last italicized sentence, I think we should aspire to be a nobody, since it's nobody who has the realization, rather than nobody who's expending all that energy to be normal.

Let's give full credit to nobody.

Remind me to discuss this one, perhaps in Vegas.