Exit Interview from the World of Poker 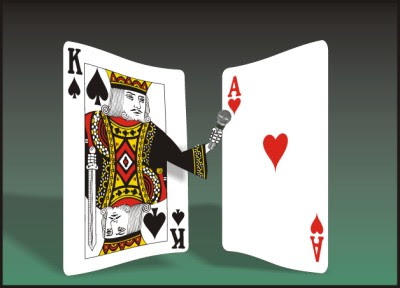 A few weeks ago I announced that I was getting out of the poker biz. Since then several of my poker media buddies have asked me why. Last night someone said: "You have any tips for those of us hanging in with the poker beat?" Well I learned long ago from my favorite writing cohort that every writer should learn the art of shameless self-promotion. So I offer here my poker exit interview. I asked a wise, honest, intelligent media maven to conduct the Q&A.

Nobody tells the truth like a guy on his way out the door. It was always a pleasure working alongside you, from that first stop in Indiana to countless hours on the floor at the WSOP. I'll be looking forward to both mentions of poker in the next book, as well as whatever else surrounds them.

Well, that was way too kind of you. Also, very thoughtful. Safe travels, Shrink.

Godspeed, Shrink. Can't wait to see how the next chapter will unfold for you.

Good bye to the subject matter.

Good luck to a fine gentleman.

If this is truly the soliloquy of a veteran actor on the way off the stage, then it was an excellent exit.

Much luck, Shrink, and perhaps we will bump into each other in the Midwest at some point or another.

Nice. More beef jerky for us!

You will be missed, but I have a feeling at least a few of us will see you at various points along the road ...

Be well, my friend.

you so often made me laugh.
i'll miss that.

Conflicting emotions... sad for the loss... excited for your future... disappointed I owe you a run good bad beat... amused about Grisle. Boy, doesn't he pack a punch?

Thanks for the good (and useful) thoughts, as always. And look forward to reading more of them, pokery or not.

Good luck on your travels sir.

If you know which event you're playing at Canterbury (especially if its O8) I might join you there :)

Thanks Tim....
Of all of the bloggers, writers, etc. You are one of the only ones that has ever given me credit for anything in Poker. I appreciate your Hard work. I was not aware that you had hung up your reporting of poker. A sad day for me. I am Jealous of you, While I am making a good living directing poker tournaments, there are many things that I dislike. You have mentioned many. Sometimes I think going back to sacking Ms. Jones groceries would be a Great Idea... Good Luck and stay in touch.